After their argument, Stacey feels guilt-ridden while Whitney seeks comfort from Lee. However, Whitney feels isolated when Lee and Bianca are oblivious to her distress. Elsewhere, Kat and Alfie continue to discuss names for the twins. Alfie is determined to go to the register office immediately to make it official. He also suggests he and Kat also get married, however Alfie is upset when he is told they can’t get married straight away. Meanwhile, Stacey apologises to Whitney for her outburst and assures her she will always be a part of Lily’s life. Stacey returns home to a surprise party to celebrate her release but Alfie is concerned when Stacey asks if she can stay with them. Alfie’s secret is then revealed when Stacey uncovers the council letters saying they are about to be evicted. C/H

Still reeling about Terry’s news, Bianca challenges him, but Terry is too concerned about TJ. Terry is relieved when he sees TJ holding his daughter however TJ reveals he doesn’t want to be a father. Later, a frustrated Bianca announces to Alfie that Terry is leaving causing him to storm out of Stacey’s party. Catching up with Terry, he tells her he loves her and the pair share a passionate kiss before they head in to his flat.

Charlie apologises to Carol and offers to do anything to earn her trust, but is shocked when Carol suggests he has a DNA test. 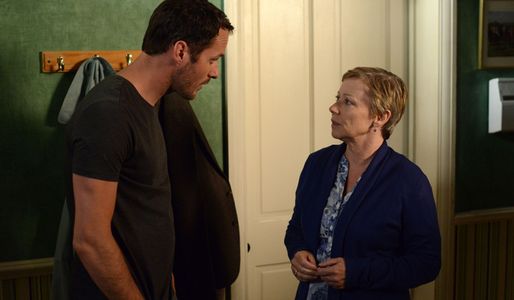