Vanessa and Leyla give a birthday voucher to Katie for a “Rejuvenation Treatment” from the salon but Katie is dubious. Meanwhile, Victoria warns Andy he’s making a mistake proposing to Katie but he sticks to his plan and even ropes Victoria in, by asking her to bake a birthday cake for Katie with an extra special diamond ingredient. Meanwhile, at the salon Bernice is giving daughter Gabby an insight into the beauty industry as Katie arrives for her treatment. But things don’t go to plan when a mischievous Gabby offers to help. Later at the pub, Victoria warns a drunken Bernice to keep her hands off Katie’s cake but a hungry Bernice has other ideas. Victoria returns to find the cake in ruins. Later birthday girl Katie arrives at the pub, post her disastrous treatment with her face red having had a bad reaction. Andy sees the funny side of it all but can and will his proposal still go ahead?

With Ali struggling at the thought of Sean going into the army she snaps at Ruby. Dan remains low and Sean decides to try one last time to bring his dad and Kerry back together, inviting her to his leaving do. At the party, Dan is not happy when Kerry arrives. A drunk Dan gives an emotional speech but soon Dan is having a go at Kerry and she decides to leave. Ruby takes charge and calls it a night, leaving Ali alone with Dan. Meanwhile, at the Woolpack everyone’s surprised when Kerry refuses a drink from a bloke at the bar, admitting how much she misses Dan. Zak tells her Dan couldn’t take his eyes off her earlier so Kerry heads back for one last try. Meanwhile things have got emotional for Dan and Ali and they share a hug. But under the influence and with their emotions running high they find themselves taking things further. But with Kerry on her way will she walk in on them?

Megan is left feeling foolish when she learns the details of Charity and Declan’s prenup. Declan, who has had enough of Megan’s meddling wants rid of her. Leyla feels guilty as she receives texts from Jai whilst Megan talks about missing him. Despite her guilt, Leyla still deliberately puts a kibosh on Megan’s plans to go and join Jai.

Debbie tries to talk to Pete but he refuses to hear her out, will she get through to him? Katie learns Vanessa has a man on the scene when Vanessa all but kicks her out! Vanessa and Kirin get passionate. 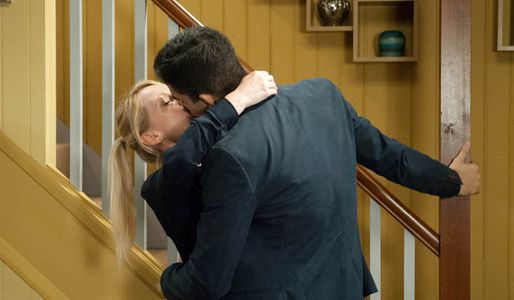