Jai is still lying where he fell in the graveyard. Meanwhile, Megan worries Jai now knows she is pregnant, but Sam reassures her he will have taken drugs and forgotten their encounter. Soon David and Leyla both fear the worst when they come across Jai’s body. Later in the factory, Priya is full of excitement as Rishi informs the workers she will be their new boss. Her glory is short-lived, by the news Jai is in A&E. Nikhil is about to leave when David tells him Jai is in hospital. When Megan hears about Jai, she feels responsible, having walked away leaving him to die. When she finds out he is still alive, she is determined to leave the village before he figures out she is pregnant. Meanwhile, there is shock when Nikhil turns up at hospital. Shock soon turns to fury when he says Rishi wants him to take over the factory. How will Priya feel?

Ross tells Pete what he said to the police and suggests if he corroborates he might get less time in prison. Later, Pete says he is going away for a bit, but gives Ross a few tips on Jack and Sarah’s routine before he leaves. Ross’ heart sinks as he is suddenly left alone with Moses. But Ross seems determined to prove he can handle domestic life.

Chrissie is anxious the caseworker wants to include the whole family, including Bernice, in Lachlan’s meeting. Meanwhile, Zak is left thoughtful how he’ll apologise to Lachlan. He heads to Home Farm and crashes the meeting by giving Lachlan a very public apology. Will it work in Lachlan’s favour? Elsewhere, Vanessa is left thoughtful, when Belle apologises and says from the way she and Kirin look at each other, she doesn’t think they are finished.

Leyla thinks Tracy is trying to get her claws into Pollard. 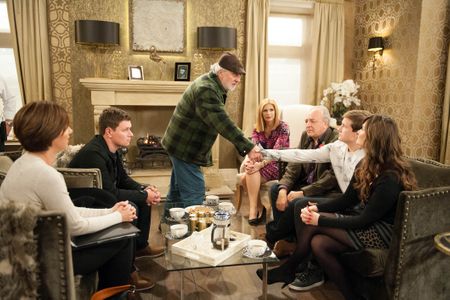