Marlon is nervous as he gets ready for his date in the café with Chloe, who he met a few weeks ago in a bar. To make things more awkward, he bumps into Laurel who tells him she is working a shift in the cafe. Paddy treads carefully as he asks Marlon a favour. Meanwhile, Rhona asks Paddy to help Leo’s new teaching assistant over something. Later, Paddy is alarmed when Marlon and Chloe’s date moves over to the pub and Chloe makes an admission. Paddy is shocked to find out who Leo’s teaching assistant is.

Struggling to cope with Nikhil’s presence, Jai comes close to ringing his drug dealer. He asks Nikhil if he is just around for a few weeks and when his brother avoids answering the question, Jai is left paranoid he is here to stay.

Emma is spoiling for a fight with Debbie and Chas, but calms down after James gives her a look. Meanwhile, Chas is convinced someone is after her, when she finds a beer pipe disconnected from a barrel. Worrying someone might have broken in and begins to panic when there are bangs outside. Cain is shocked at how vulnerable his sister is. Emma tells Chas she is probably having panic attacks after the shooting. James says he is glad Emma was there to help and she beams with pride, but this is short lived. Later, when James is still worried about Chas and goes to check up on her. Emma is left seething with jealousy fuelled by hatred for Chas.

Debbie and Nikhil clash, but agree to stay out of each other’s way. Nikhil assures her he hates her more than she could ever hate herself. Pearl offers to teach Vanessa how to knit, as something to do whilst she waits around in the hospital. Vanessa says she will be able to start breastfeeding Johnny in the next few days and Adam is careful not to pressure her. 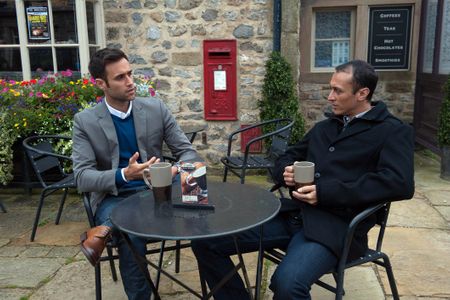