Emmerdale 05/06 – Val and Pollard get back on track

As Belle heads out for the day with Chas, Zak is quick to suggest to Lisa that they start packing, though Lisa is having second thoughts. Sam listens to their plans from the stairs, pained. Later at the café, Dom's in a bad mood awaiting the trial and Sam's alarmed when he overhears him tell Vanessa that he needs to see Belle go down for Gemma's murder. Soon Sam is at Home Farm and asking Nicola for an advance on his wages, wanting the money ‘to cheer Belle up’. Back at the Dingle's, Zak has gone ahead and packed suitcases but Lisa stands in his way and says that she will not tear their family apart, explaining that they will get through Belle's trial together. Meanwhile, Sam prints out a ferry boarding pass for Belle. What has he got planned? And will someone cotton on?

Val tells David she has a plan and explains she wants him to keep Eric away from her. Later, Pollard arrives back from the hospital and is eager to find Val, worried that he's failed her. David tells Finn and Victoria to keep Pollard sweet and prepares to tell them the secret. Later, at the B & B, when Pollard worries he's let Val down, David's about to reveal all but Victoria intervenes and covers. Finn suggests that David takes Pollard for a drive to buy some time. Pollard spots Val outside the church and apologises to her. But as Val gets down on one knee, it seems it might be her turn to make a public display of affection.
​
Megan attempts to get her revenge on Leyla as she sends her to scrub the factory toilets. Leyla insists she'll have to do more than that if she wants to break her. Moira’s unnerved at James and Adam’s apparent truce. It’s clear the lies are weighing heavily on Moira’s shoulders.

Belle is shocked as Sam confesses his plan for them to run away to Dublin. Meanwhile, at the Dingle's, Dom bursts in and asks where Belle is, telling Zak and Lisa that he knows they are doing a runner. Lisa and Zak are shocked to discover that Sam is taking Belle to Dublin and Dom is quick to call the police. Zak and Lisa decide to go after them before the police catch Belle doing a runner. Dom follows. Belle forces the truth out of Sam and whilst he insists that Zak and Lisa would have wanted this, Belle realises they knew nothing of his plan. Will Sam persuade Belle to hotfoot it on to a train and not look back? Or will Belle stand firm and refuse to to go? Either way, the pair are sure to be in a whole lot of trouble if the police catch up with them.

At the church, Pollard is horrified when Val confirms they have written their own vows, having only known about the wedding for five minutes. He gets off to a shaky start but when Harriet encourages him to speak from the heart things soon improve. A happy Val says her vows to Pollard and Harriet beckons the pair to kiss. Later, the loved up pair agree they are happy to take things slow, but it seems it may only be a matter of time before they are back to their former passionate selves.

Harriet informs Ashley that she has been summoned to the church finance committee. He praises her on her first vow renewal and it seems the pair may be close to a kiss. A tipsy and suspicious Victoria confronts Bernice about Andy, having observed the pair together. Victoria knocks Bernice's confidence leading her to call things off with him. 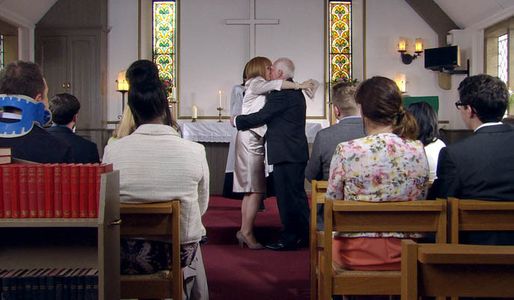