David and Alicia wonder how to spend the mystery money. Jacob lets it slip to Leyla about some insurance money Alicia and David have received. Later that evening, Alicia squirms when Leyla mentions her recently deceased boss ‘Cheesy’. The penny drops for Alicia that the money was meant for Leyla who used her name when working at the club. But will Alicia confess the truth to her sister?

Having spent the night in a cell, Diane and Pollard are released without charge but Val is not so lucky and is charged, fuelling her anger further. Refusing a lift home, Val arrives back at the Woolpack splattered in mud. Diane is desperate to make amends with her sister but Val is stubborn. Can she forgive and forget all that has happened?

Kerry enlists the help of Amelia and Brenda to help her make a wedding video. But Brenda is gob smacked when Kerry uses Gennie’s death to try for a sympathy vote. With marriage on her mind Kerry starts to bid for a wedding dress on eBay. Surely Kerry is getting way ahead of herself?

Edna sneaks an envelope of money into Ruby’s bag. Later, Ruby and Ali are confused but touched when they find it, which leaves Edna with a warm glow. Meanwhile, Bernice and Andy continue their secret dalliances. 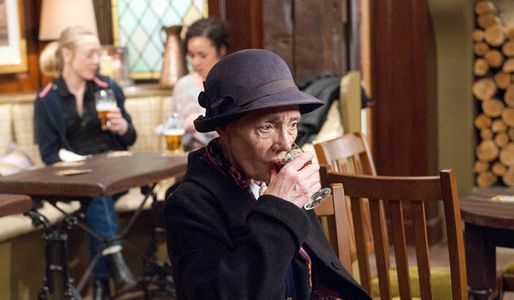