Chas is not coping at all after discovering the pub has been trashed in the night. All eyes are on Emma as prime suspect, especially when she admits to being the one who locked Chas in the cellar. James defends her but it’s clear he’s worried about Emma’s state of mind as he begins to question his defensive former wife. Emma’s furious and full of hatred. She later confronts a panic-stricken Chas. Petrified, Chas crumples to the ground. Has she met her nemesis? Is Emma the one who has been stalking her?

After visiting the place he got shot, a distressed Robert tells Victoria when he gets to see Aaron deliver his plea in court he will be able to tell if he did it or not, still questioning whether Aaron could have pulled the trigger.

Rodney quizzes Bernice over the sleeping arrangements with Lawrence, his questioning hits a nerve as it’s clear she is not happy with the situation. But later when Bernice sidles upstairs after Lawrence will it work to her advantage or will she be cut off at the pass?

Zak enjoys Joanie’s company and is dismayed when she accepts a drink from Rodney. The idea of doing the school run makes Paddy squirm. He later asks Marlon to have Leo overnight so he can take Rhona on a ‘date-night’ to try and put the past behind him. 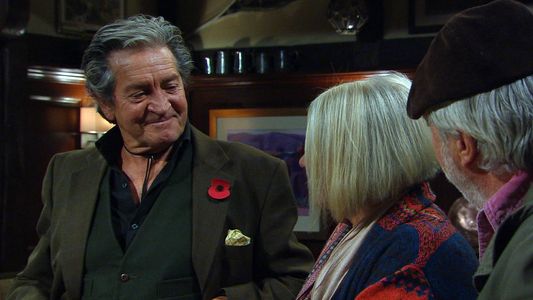