Charity is determined to find out what is wrong with Cain. Meanwhile, Debbie is disgusted Cain has re-hired Ross and refuses to work with him. A sullen Dan is also shocked to see Ross has taken his job. Cain is left in turmoil when Charity threatens to tell Moira everything, knowing he collapsed last night. Later, Charity panics when Cain explains his symptoms and she insists he goes straight to A&E. As they wait at the hospital Charity supportively holds his hand but Cain wants to see the doctor alone and soon is shocked when he is told what is wrong with him. Cain is terrified to learn he has an aneurysm that will require an operation straight away. Unable to cope with what he has just learnt Cain rushes out, lying to Charity his symptoms are simply stress and alcohol related. Charity is unsure whether to believe him, but Cain flees the hospital as he tries to hide his terror.

Robert is unnerved when Katie threatens to tell Chrissie about his affair with ‘A’. Later, Chas says she speculates it could be Alicia. Whilst, Aaron is unnerved to learn Katie has been looking on Robert’s phone and Robert is panicked as Aaron reveals that Katie has been speaking to Chas about his affair. Later, Robert means business when he threatens Katie to stay quiet using the wedding rings as collateral. This is war between Katie and Robert and the battle lines have been drawn.

Debbie talks to Finn over dinner and when he asks her about when she gave up Sarah, realises how troubled he is over reuniting with his mother. Pete realises this Emma thing is far from over for Finn. Nicola asks Laurel to join her for a drink - whoops bang goes abstinence. 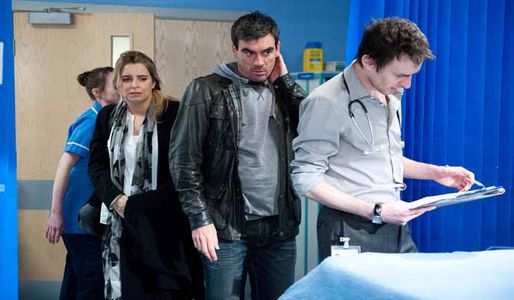