Moira arrives at the Woolpack to find out they have planned her a hen night. She is stunned when Cain suggests they are marrying next week and although overwhelmed a delighted Moira agrees.

Adam catches James at Butler’s packing his things and is quick to tell him how Moira is happier now he has gone. James is unable to shake his doubts about Adam and when he suddenly comes across the hidden wad of cash, determinedly sets about buying a home DNA testing kit online. Could James be about to burst Moira’s bubble?

At Cain’s stag night a cut up Pete informs Ross that Debbie has dumped him. Later, after breaking free from the stag group, Ross finds a tipsy Debbie sat outside the pub who has abandoned Moira’s hen do. She suggests he go back to hers to open another bottle and, challenged, he follows her. Will Ross be tempted to take things further when a seriously drunk Debbie kisses him?

Donna is guilty as she lies to Marlon about reporting Greg to the police. Belle is frustrated when Sean appears to be procrastinating over their plan to have a baby until he asks Dan for private study time so they at last can find time alone. 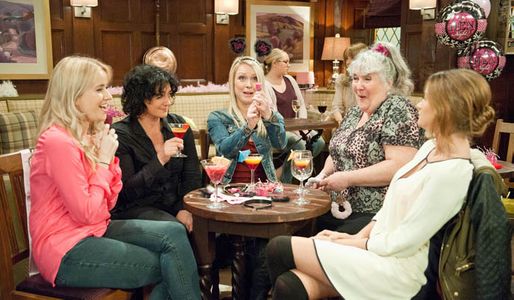