Charity is rattled when Megan informs her Declan has been asking questions and is having doubts. Later, an increasingly desperate Charity asks Chas one more time to go along with her plan and pretend she had the abortion, but Chas refuses point blank. Declan privately calls his solicitor to see if the pre-nup has a get out clause. A stressed Declan asks Charity to accompany him to the abortion clinic to prove she didn’t abort their baby. Seemingly trapped, will Charity find a way to get out of it?

Laurel’s father Doug arrives in time for her wedding. Laurel practices her wedding vows with Leyla. At the pub, Doug worries it’s not a good time for Laurel and Marlon to get married but Diane reassures him. Later, Laurel and Doug come across Marlon watching something on the camera but he quickly turns it off covering. But once Marlon and Doug are out of the room, Laurel presses play on the video camera and sees Donna, her concerns mounting.

Sam opens a credit card statement and sees exactly how much he owes. Lisa is barely through the door before she clocks Sam’s worried face. Later, Kerry’s concerned when she sees Sam try to steal and she warns him not to do anything silly, reminding him to think about Samson.
​
Debbie goes on a night away with Pete. Laurel questions why Hilary isn’t with her dad while Leyla warns Diane away from Doug. Jimmy tells Nicola he is heading off to do Zumba at the gym and later returns in skinny jeans, she is left wondering exactly what she has started. 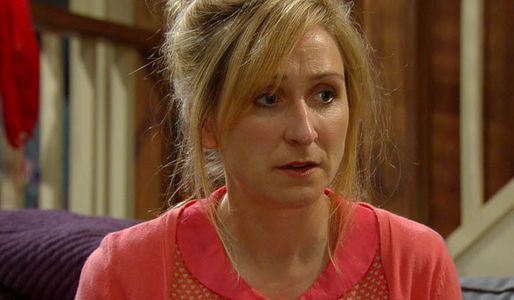