It’s Aaron’s day in court. Victoria is put out to see Adam and Andy are going to attend court to support him. Chas’ nerves are shattered at the prospect her son could go down for a very long time given his history. Aaron arrives in court and the charge is read out to him . He is then asked how he pleads. He locks eyes with Robert as he pleads ‘Not Guilty’. Aaron is refused bail to the utter despair of his mother. Robert breaks the silence in court and goads him to ‘tell the truth’ and takes it as an admission of guilt when Aaron says Robert should have done everyone a favour and stayed dead. He is bundled away by the security guards. Robert wonders if this really is his admission of guilt - did Aaron really try to murder his former lover?

Andy cannot cope with the prospect of an innocent man going down. Ross tells a guilt ridden Andy if he confesses, he can kiss goodbye to his kids for a very long time. Andy, clutching a bottle of Vodka, staggers off to Katie’s grave. Ashley is stunned to find Andy in a drunken state by Katie’s grave. He offers help thinking it’s Katie’s death that is devastating him. He is shocked to the core when Andy admits Aaron is innocent before staggering off and how it was him who wanted him dead. Ashley wonders if this Andy’s confession or is it the drink talking?

Chas’ torment continues and she tells James about her run-in with Emma and how she is scared of her. Cain suggests taking her to the doctor if she continues to have trouble sleeping. Feeling guilty about taking up so much of his time, she manages to convince him she is fine but it’s clear her world is in tatters.

Finn realises Emma hasn’t been home all night. Bernice begins to get cold feet about her impending marriage. She asks Lawrence about his sexuality and he evades the issue, reassuring her he never thought he would meet anyone else after his wife died. Can Bernice cope with a sexless marriage? When Rodney makes an inappropriate comment about Joanie, why is Zac so obviously annoyed? 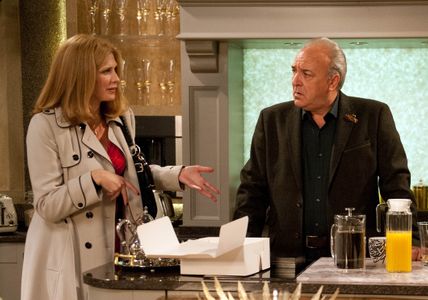