Pollard wakes up on the sofa, still fully dressed, with Val's coat over him. Elsewhere, Diane changes her mind and decides to go to the funeral but it's clear she's dreading the prospect of facing him. In the café, everyone worries about Pollard when Paul tells them how livid he is with Diane. David hopes Ashley is right when he says Diane and Pollard will be able to find a way through this. But later, when Diane tries to talk to Pollard, he continues to blame her for Val's death, he's still furious and it's obvious this is far from over. The stage is finally set for a very unconventional funeral and everyone's relieved when an emotionally fragile Pollard finally turns up, but is he there to stay?

Kerry gives Connor, a good-looking guy she thinks is a reporter, directions to Home Farm. At Home Farm, Connor kicks a stable door off its hinges before regaining his composure and heading towards the house. Lawrence is wary when Connor introduces himself as an odd job man, explaining he heard about the Enterprise Awards and wanted to impress Lawrence with his can-do attitude. But is Connor to be trusted?

Andy decides it's time he moves on and sort out some of Katie's stuff. In the pub, Andy's left thoughtful when Chas says both him and Aaron could do with a mate right now. Later, Aaron feels a mixture of hope and guilt as Andy hands him an olive branch. But soon, Aaron's uneasy when Andy finds Katie's phone bill and goes to call the last number Katie dialled before she died…

Alicia's taken aback when Paul tells her he'd like her to be a partner in his bar, but she worries about the timing for David. 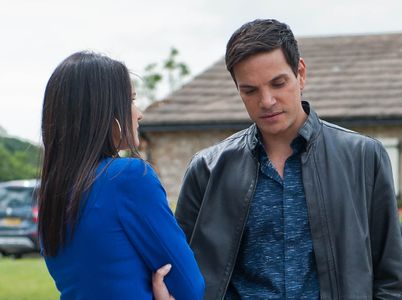