Kirin’s nervous about the launch and is pleased when Vanessa says she’ll go along. Victoria feels left out when the baby kicks and Adam’s surprised at her attitude. At the Factory, Kirin’s impressed with Belle and how she’s handling the launch and he begins to see Belle in a new light. Kirin soon walks into the office and catches Jai snorting coke. Paranoid Jai creates a scene in front of everyone at the launch and Vanessa gets pushed to the floor in the process. Kirin’s concerned. Meanwhile at the Woolpack Adam questions Victoria’s attitude over the baby is pained to realise the awkward position he’s put her in. Later, Vanessa has a sudden twinge of pain. Has the earlier fall taken it’s toll, and where is Adam when she needs him?

Alicia tries to talk to David but he snaps at her questioning what has happened to the woman he married. Later, David opens up to Priya whilst elsewhere, Alicia confides in Lisa. With David keen to move back to the village to look after his dad, and Alicia unable to settle there after what she has been through, are the couple destined to live their lives apart?

Pete tells James he’s going to the doctors about his depression and is surprised by his dad’s support. Meanwhile, Emma confronts Debbie..Later, Debbie arrives at Butler’s and tenses to see Pete, her hostility towards him clear. Worried about Pete’s vulnerability, James decides to approach Debbie, but will he make the situation worse?

Ashley tells Sandy he’s going to the doctors but it’s clear Ashley is not confident about it.

Pollard continues to struggle with his grief. Harriet explains to Bob what happened with Sandy. 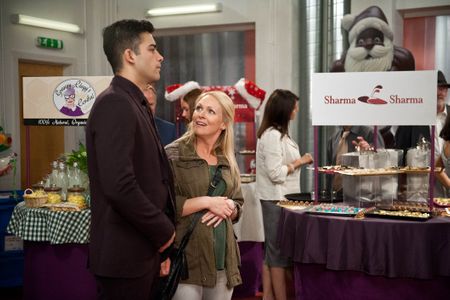