Marlon lets April have the day off school so they can go for a picnic. Whilst sharing quality time with April, Marlon misses a call from Laurel and almost misses the wedding rehearsal. At the church, Ashley is ready and waiting to stand in for him when an apologetic and breathless Marlon runs in with April. Later, Laurel and Marlon are clearly having very cold feet as they head to their respective stag and hen parties. It is not long before Laurel slips away from the pub, followed by Ashley. In the pub toilets Doug overhears Marlon confiding in Paddy. When Ashley catches up with Laurel she tells him her concerns, before drunkenly trying to kiss him. Ashley is worried, telling Laurel to call the wedding off for the sake of the children.

Worried Declan will get to Debbie first, Charity goes to see her daughter and wastes little time in telling her she lied about having a miscarriage, explaining she in fact had a secret abortion. Debbie is lost for words. Charity then drops the bombshell she has told Declan it was Debbie who had the abortion. A sickened Debbie is left reeling. Charity begs for her to cover for her to Declan but will she?

With Ruby convinced Dan is acting weirdly, Ali tells him to start acting normally, but Dan struggles. Will Dan come clean about sleeping with Ali at the risk of breaking Kerry’s heart?

Jimmy fronts out the laughter and tells Nicola he is a new man. Kerry helps out Sam after he opens up to her about his debt and spending money on Tracy. 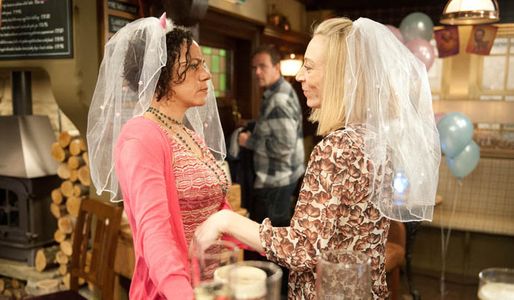