Alicia confronts Priya about her feelings for David, threatening to move away from the village if she continues to pursue him. Furious, Priya tells Rishi what Alicia has said and is thrown to realise it’s not just her who thinks this. With the idea of a perfect family on her mind, and emotionally exhausted, Priya makes a big decision.

Lisa struggles with what the future holds. Meanwhile, Sean sees Donna giving Sam a lift to the police station, assuming it’s to do with Belle but is taken aback when he learns Sam is being charged for attempting to flee with his sister.

Seeing her sister’s misery, Nicola gives Andy an ultimatum over Bernice. Later he goes to see Bernice to clear the air but finds himself making matters worse.

Donna starts the Christening preparations, much to April’s excitement. She tells Marlon she wants Rhona, Paddy and Laurel as Godparents but Marlon’s taken aback when Donna reveals she too will be Christened and all in two days time.

Harriet’s impressed by Ashley’s advice to Dom, her attraction for him growing but she is soon rattled when she discovers Ashley has been asked on a date by a parent from school. 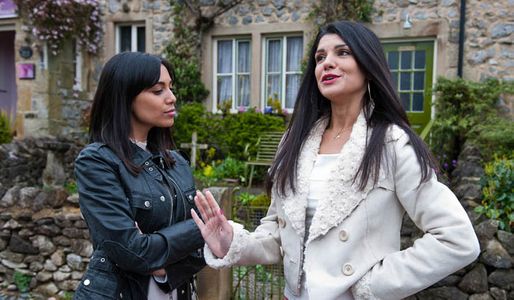