Eric refuses to discuss the night before with Diane. Val’s heartbroken when Belle asks to interview her for her film about a break up. Eric is relieved when Diane tells Eric the night before was a mistake. Victoria is shocked to find Val packing, and urgently tells Diane. Victoria has to tell her about Ian and the HIV, and Diane is horrified with what she has done.

Bernice warns Jimmy and Nicola to stay away from the house as she has her date with Anton. She shows him around her house, and is confused by the large holdall he’s carrying. He then pulls out a bottle of champagne, and is delighted. It turns out Anton actually robbed the place and cuffed Bernice to the bed.

Elsewhere, Gemma’s eager to get to school, and Vanessa thinks it’s about a boy. Sean’s annoyed when Gemma goes on a date with Nathan. Pete warns James to be careful with Chas and remember whose sister she is.

Diane is riddled with guilt after the revelation that Val might have HIV. She tells Val she knows the truth and tries to comfort her as Val pours her heart out. Diane encourages her to get tested and tell Eric.

Bob is upset when Ruby shows him video footage of Brenda stealing a customer’s scarf. Will Bob get Brenda to tell him the truth?

Chas asks James why there’s a reason two people have warned her against him in one evening. James admits he wasted a lot of time over someone but is past it now. Chas doesn’t realise he is referring to Moira and happily lets herself get closer to him.
​
Elsewhere, Eric admits to David he had a drunken fling, and it’s made him realise how much he misses Val. Dom’s worried that Gemma is being bullied, and is relieved when Belle agrees to talk to her. Bernice is humiliated as she tells the police about Anton. 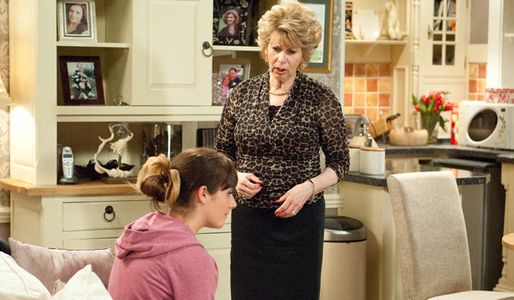