Charity has been ostracised by all her family and has never been more hated. Debbie tells her they are all finished with her after what she has done. Meanwhile, Sam is furious unable to comprehend what Charity did to Rachel. And even normally compassionate Zak turns her away. Jai is still reeling over the fact it was Charity who forced Rachel to leave with his baby. And Megan is still full of loathing for her.

Charity is concerned when her solicitor arrives unannounced with a DVD they have received by courier. Charity is stunned to watch a confession Declan has recorded. His statement, digs Charity in even deeper, as it reveals every single one of her dastardly deeds. With all her secrets now fully exposed her solicitor tells her copies of this DVD’s have already been sent to the police and the insurers, explaining there will now be a full investigation.

Charity realises she is about to lose everything, including her freedom and, panicked, makes hasty plans to go. She empties a safe and is packing when a furious Megan and Jai storm in spoiling for a fight holding the DVD they have also been sent. With Jimmy standing in as her protector Charity avoids this altercation but Megan menacingly tells Jimmy that Charity will get what is coming to her. Meanwhile, at the Dingles, Sam has watched a copy of the DVD and hearing Declan give the order to make Charity pay for this, he grabs his coat and full of fury leaves. Meanwhile, Ali's exasperated she can't find any news on Rachel's whereabouts and Ruby's concerned when Ali storms over to Charity to get some answers and Bob hopes Ali isn’t about to do something stupid.

Not long after, Charity drives along a country road leaving the village behind her but sees a stationary car blocks her way. She gets out of her car to go and see what is going on. Suddenly Charity is hit hard on the head. She slumps to the floor as her unknown assailant stands over her.

A woman called Maxine arrives at the farm telling Moira her son shares a cell with Adam but there might be a problem. As they begin to talk, Moira becomes suspicious and is soon shocked and scared when Maxine suggests they work out a deal for Adam's wellbeing…

Doug wants his vlog Q&A to be held at the Woolpack. Diane admits to Katie she doesn’t want to hurt Doug but admits she does have feelings for him. 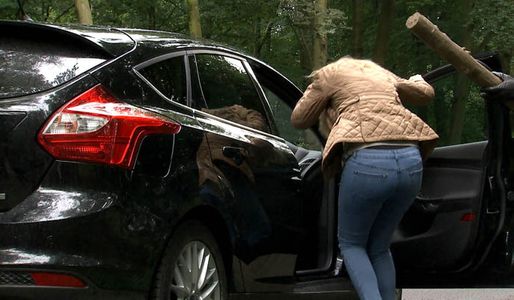