Emmerdale 14/12 - Harriet plans to propose, unaware Ashley is about to end things

Harriet confides to some of her plan to propose to Ashley during the carol service. Soon the church is thronging with a large congregation, many primed just to see Harriet’s proposal. But could poor Harriet’s hopes soon be dashed? As unbeknownst to her, Ashley has quietly confided in Bob how he’s preparing to dump her, explaining he doesn’t think it’s fair for Harriet to stick with him for his future, given what it now holds for him. As the service starts Harriet is excited, utterly unaware of Ashley’s conversation with Bob but will her proposal go to plan? Soon Harriet is on her feet ready to do her reading but instead pops the big question in front of the packed church, as silence descends everyone awaits Ashley’s answer. Will Ashley be accept?

Stubborn Diane insists she wants to go through chemo quietly and without fuss so wants to attend her appointment alone which frustrates Doug. Later at the hospital, Diane thinks the man next to her is familiar and realises he's Chas' ex, Gordon, who's there because he has Hodgkin's Lymphoma. They talk about Aaron and he says he's had time to dwell on the things he'd change. Gordon asks Diane not to mention she's seen him.

Nikhil's irritated to see Jai's bought flowers for Megan. Jai is hoping the baby's a fresh start for him. Joanie’s started at the factory and Lisa's amused by Joanie's antics as she is brightening the day up. Later, Lisa plans to get Joanie to sing at the village hall opening and Zak remains a little uneasy in their company. 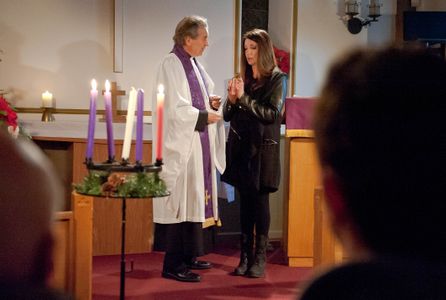