Adam is weighed down by the footage he’s seen of Aaron, but Victoria gets the wrong impression and thinks he is hiding his worry about Johnny. When he goes to the scrapyard, Adam is dismayed to find the gun just where he saw Aaron hide it. Meanwhile, Victoria sees Vanessa in the café and asks if everything is ok with Johnny, as something is clearly troubling Adam. Later, Adam shows Aaron the footage of him stashing the gun and directly asks him if he shot Robert. Meanwhile, Victoria uploads the video to the internet, unaware of what she is about to publicly expose.

Priya is still upset Rakesh lied to her about spending time with Chrissie. Rishi isn’t convinced when Priya says she would be more capable of running the factory than Jai. Later, Rishi suggests to Jai he should step down from the business. But will Jai agree? Meanwhile Rakesh and Priya kiss and make up in the office! Later, Rakesh watches the video online and see’s the footage of Aaron…

Chas worries Aaron is guilty. Diane insists Chas gets some rest. She says she won’t be able to, as she is having nightmares, apprehensive at the idea of being left alone with her thoughts. Leyla despairs when she learns Pollard won’t be present for the hen party, as the party only booked to get verbally abused by him. Soon Finn’s heart sinks.

Adam and Aaron are desperate to get rid of the gun. But when the police turn up at the scrapyard is it too late? Meanwhile, a disorientated Chas awakes to notices her wardrobe has been left open with half the contents strewn around the floor and asks Diane if anyone has been in her room. Chas has a go at Emma. Before long Aaron bursts into the Woolpack and tells Chas about the gun, stressing he didn’t shoot Robert. The police arrive shortly after and arrest Aaron. Diane is absolutely livid at Chas’s betrayal knowing she was covering for Aaron by implicating Lawrence and demands she leaves the pub, but a defiant Chas refuses. Aaron’s mind races as he is questioned in the police interview room. He becomes desperate when he is reminded that he’s on license and whatever happens, he is going straight to prison.

Chrissie is surprised Rakesh called the police regarding Aaron. But when she sees the footage, she is relieved knowing Lachlan’s in the clear. Surely this now clears Lawrence if he makes a retraction? Later in the prison visiting room, Lawrence is stunned when Rakesh and Chrissie tell him Aaron shot Robert and he should be now off the hook.

Pollard is angry and takes his anger out on all of them. Will he ever turn a corner? Kerry tells Bernice she had a lucky escape from Lawrence and she should find someone who excites her. But will Bernice agree? 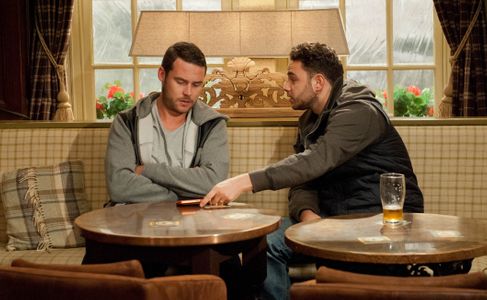 Emmerdale 3/06 - Ashley is in a coma whilst Victoria panics