Bob's shocked to realise Harriet has taken her things over to Edna’s. Whilst confused Sandy asks Ashley why. In the shop, Nicola's suspicious when Laurel snappily says she's happy for Harriet and Ashley. However, later Laurel's shocked to later what has happened. Meanwhile, Ashley takes the kids out of school on a complete whim for a winter picnic; seemingly determined to give them some happy memories. When Nicola clocks Laurel's fond look towards Ashley, Laurel's forced to admit she's still in love with him. Nicola decides she will get them back together by the end of the year.

Ross is secretly using Emma for child care but it’s on the quiet as Debbie has banned Emma from going near Moses. Later, James tells Pete, about Debbie banning Emma from seeing Moses and tells Pete to move back in, he can have Ross' old room, rather than stay in the caravan. Pete knows Emma is going behind James' and Debbie's back regarding having Moses, she begs him to keep quiet.

Diane gets ready to visit Chas in the hospital but she is apprehensive. At the Mental Health Unit, Chas is pleased, but nervous, to see Diane. But will Diane mention whom she has seen? Later Diane makes a big decision.

Sam wants to visit Megan but Zak awkwardly explains that in life, people can't always have what they want, clearly thinking about his own feelings towards Joanie. Later, at the village hall, Zak hears Joanie practising her singing on stage and becomes even more smitten with her. She's unsure if she'll go on with the show but is encouraged by Zak. 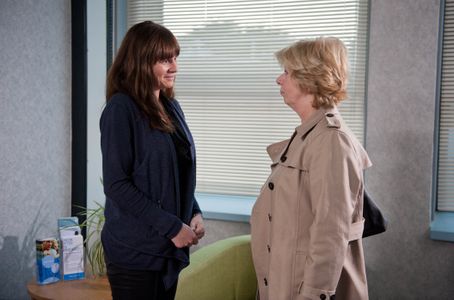