Jai doesn’t want Priya seeing Rakesh but regardless she agrees to go on a date with him. David becomes suspicious when he sees Rakesh struggling to install Amba’s car seat and Alicia’s irritated when David continues to obsess about the man he saw Priya with. At their picnic, Rakesh offers Priya dessert and she prepares to tell him about her eating disorder but will this scare him off or do the reverse?

Ross tells Adam he has a job for him later today. Ross runs through what Adam needs to do as getaway driver before heading inside a shop but Adam struggles to hide his terror when Ross moment later runs out and jumps into the car. They speeds off down the road but Adam is later humiliated to discovers what their job was.

Bernice tells Diane she’s booked a flight to Australia and it leaves tonight. Diane informs Andy that Bernice is going to Australia. Andy’s sorry to have hurt Bernice but tells Diane that Katie means so much more to him. Meanwhile Leyla is annoyed Katie gave her a hard time over Adam when she finds out about the kiss.

Ross informs Adam that Andy kissed Katie, Moira’s asks Pete to be her farm manager, Daz gives Sean advice for a job interview but Sean tells him that he has bigger plans and Diane tells Kerry that Daz has booked their wedding. Kerry hugs Daz but Dan is not impressed. 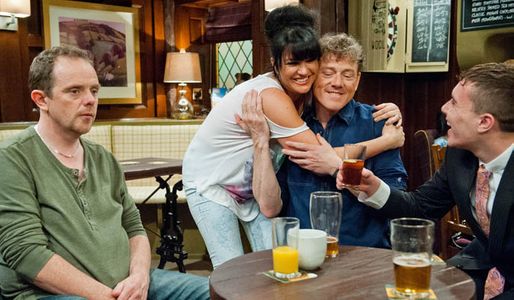