Debbie worries over Sarah’s health whilst Ross, who has stayed over, insists he wants to be with Debbie promising they can take it slowly. Later, Finn, Emma and James are floored to discover Ross spent the night with Debbie. Andy and Debbie attend the hospital for Sarah’s results. Soon Chas is left stunned to discover Debbie slept with Ross again. Debbie reveals that Ross wants them to be together but Chas warns her off him, but is Debbie ready to give it another go? Meanwhile, Ross heads back to the caravan..

Vanessa feels alone as she sees how devoted Adam and Victoria are together. Elsewhere, Kirin comments to Belle how they make a good team and asks her out on a date, believing Vanessa no longer wants anything to do with him, but is that actually the case?

David hoodwinks Pollard with the aim of getting him to show his emotions. With Chrissie due to arrive home tomorrow, Robert knows he needs to do something to help her ahead of the impending court hearing. He later pins his hopes on Rakesh.

Pollard is pleased to receive a letter saying Chrissie’s pleading guilty to all charges and David’s encouraged when Pollard apologise for his recent behaviour. Elsewhere, Chrissie’s unimpressed to see Robert again, she refuses to listen but is left confused when he’s adamant she needs to speak with Rakesh and change her plea. But will she? Later after court, Pollard’s mood has changed as he crashes into Home Farm armed with a cricket bat and heads directly towards Chrissie. 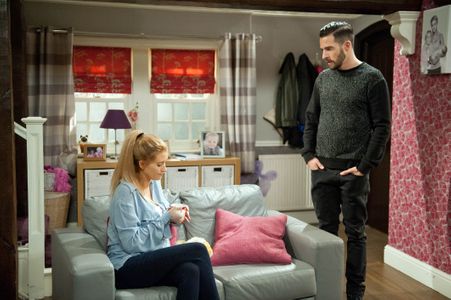