David quizzes Priya about Rakesh but she skirts around the subject. Jai realises being heavy handed with Priya may only serve to push her in the wrong direction and he decides to apologise to his sister. Later, Rakesh arrives at Holdgate and apologises to Priya for causing any problems with her brother. Convinced he has no chance with her, Rakesh is ready to leave. But with Jai’s words ringing in her ears, could they have the opposite effect and result in Priya agrees to share her future with this man.

James asks Chas to give Adam a job behind the bar but to make out it was her idea. Adam soon takes the bait. Later, Pete arrives at the pub and lets it slips he’s the new farm manager much to Adam’s annoyance. As Adam struggles at pulling pints, Chas decides the cellar work may be the best option for Adam and tells James to show him the ropes. With things already tense between them, being stuck in a confined space is unlikely to help. And it’s not long before Adam’s rage gets out of control amongst all the bottles in the cellar.

Victoria discovers why Eric fired Finn and tells Finn he needs to apologise. Finn reluctantly does so but almost instantly retracts it when Eric says it doesn’t sound like an apology to him. Victoria pleads with Eric to help make Finn see the world isn’t against him. Will Pollard get through to a hurting Finn?

David struggles to take in news of Priya’s engagement and is shocked to discover it’s an arranged marriage. He snaps at Alicia when she tries to appease the situation, saying Amba isn’t her daughter. Priya blames Jai for causing trouble but Rakesh reassures her they will come round in the end. David tries to make amends with Alicia and they a heart to heart about their situation and David worries he doesn’t even know anything about Rakesh. David’s concerns are later heightened when Jai explains Rakesh cannot be trusted and vows to stop their wedding. But will David help him?

Adam continues to smash up bottles in the cellar and James who has had enough of his anger, grabs him forcing him against the wall. James tells Adam what happened with his mum didn’t mean anything, which only serves to rile Adam more. Meanwhile, Chas is frustrated her efforts were in vain. Adam takes a bottle of vodka and heads into the back room; an angry Chas follows snapping at him and defending James. Adam sees an opportunity to pay James back and kisses Chas. She pushes him away, appalled by his behaviour. But when Chas calls James will Adam finally get the reaction he wants?

Kerry is annoyed Dan refuses to go tiara shopping with her. Dan learns Sean didn’t get the job but is insisting he’s not returning to school. Daz brings Sean into the salon, explaining he needs a job. He persuades them to give it a go but Sean’s not impressed. Kerry is grateful especially when Daz offers to join her for tiara shopping, suggesting they go for cocktails so he can get to know his future sister in law. But how will Dan feel about Kerry and Daz getting on so well?

Tracy tells Sam about a dodgy call when her phone begins to ring again. Sam tells her to turn it off but she says she needs the money prompting Sam to offer to pay for her time. Adam makes hurtful comments to Finn about his mum and later Finn is upset when his dad seems more interested in sorting things out with his ‘new’ son rather than with him. 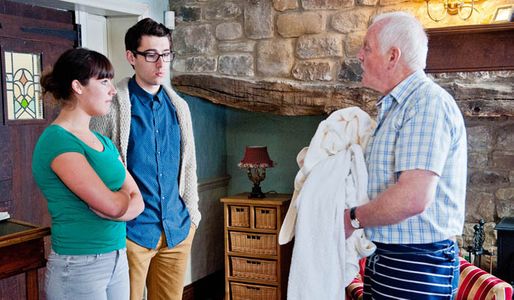