Pollard is pleased to receive a letter saying Chrissie’s pleading guilty to all charges and David’s encouraged when Pollard apologise for his recent behaviour. Elsewhere, Chrissie’s unimpressed to see Robert again, she refuses to listen but is left confused when he’s adamant she needs to speak with Rakesh and change her plea. But will she? Later after court, Pollard’s mood has changed as he crashes into Home Farm armed with a cricket bat and heads directly towards Chrissie.

James discovers Nana Barton has had a stroke, Emma suggests he goes to look after her but he’s worried to leave with the family as it is…

Chas helps Belle prepare for her date with Kirin but Vanessa is not happy to learn about it and later makes an admission to Carly. Rodney’s and Jimmy might have got themselves in a bit of a bind. Debbie is impressed with Ross’ paternal instincts. 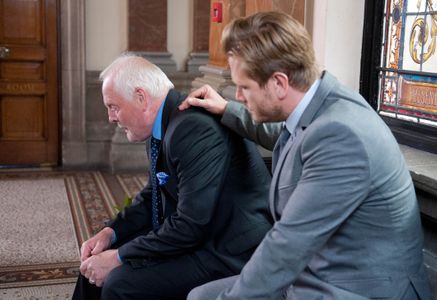