Emmerdale 17/12 – Moira tries to get James to face facts

James’ farm is being repossessed, and Moira tells him he needs to face the music – that he doesn’t have a farm anymore. She then gets awkward when James turns on the charm to her, and is put in an even more awkward position when Finn and Peter ask if they can stay with her.

David worries that he might never get to see his baby, whilst Alicia worries about how Jacob will take that David is having a baby with another woman. Jacob is not a happy chappy when the pair tell him, though David thinks he’ll get over it. Later Bernice announces David and Alicia’s engagement, devastating poor pregnant Priya.

​Elsewhere, Ashley tells Sandy he’s resigned and Harriet finally officially takes the vicar’s job, though she is immediately met with hostility. Charity continues to be mardy and turns down Jai’s offer to set up a trust fund for Noah. 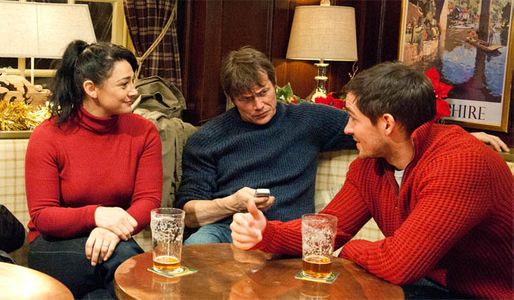