Zak worries about Cain’s reaction when he comes home to find James and his sons moving in with Moira. Zak leaves Cain a message telling him to come home ASAP. Moira gets all dressed up to go to a farmer’s party with James when Cain shows up, but Moira is less than pleased at this and demands an explanation. She can’t be bothered with Cain’s games and goes to the party with James anyway.

Charity tries to her best to carry on as normal but Debbie is worried she will eventually blow a gasket. Jai then gives her divorce papers, and she reacts by promptly kneeing him in the crotch and storming out. Girl power!

Edna tries to prepare the nativity set, but Harriet wants to shake things up and get rid of it altogether. She wants to put her own stamp on things how she is in charge.

​Elsewhere, Val and Kerry continue their War of the Christmas Lights to Pollard’s irritation – but Val takes it one step too far when she sets out with a saw! Ross starts chatting to Charity. 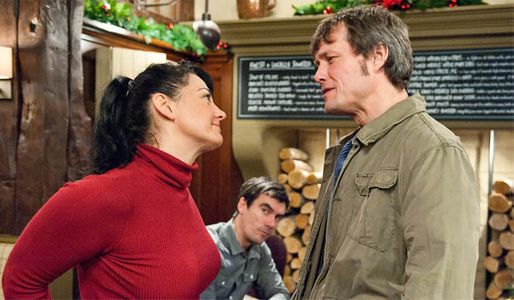