Lawrence calls Bernice, inviting her over for lunch. Connor arrives at Home Farm, covered in bruises and tells Lawrence he was beaten up because he's gay. Lawrence feels sorry for him and offers to clean him up. Connor leaves a blooded tissue in a waste bin as Lawrence gives him £300 after learning he's skint. At the house for lunch, Bernice asks Lawrence if he's gay but they're interrupted by the police and Lawrence is horrified to learn of Connor's accusations of assault. Later, Robert returns and Lawrence is overcome when Robert says he believes him and vows to help him, but can Robert be trusted?

Tracey and Finn wonder what to do with the pictures of Val from the funeral and are surprised when Pollard arrives claiming to be fine. Meanwhile, Alicia tells Paul she hasn't had a chance to speak to David about his offer regarding Portugal. David's worried Pollard might do something stupid. Paul says he has a drastic plan...

Aaron's got a new phone in light of what Andy discovered but stuffs it in his pocket when Andy arrives. Chas says it would have been Katie's birthday and Aaron feels guilty. Later, Andy agrees to go riding with Sarah to mark the occasion, determined to move on. Later, Andy's grateful when Aaron tells him to remember the good times and promises things will get better.

It's moving day for Jimmy, Bernice, Rakesh and Priya, but Priya's clearly unhappy. Rodney organises a date with a client as Hunter's back in business, and Jimmy's thoughtful when he learns Rodney gets £200 for a date. 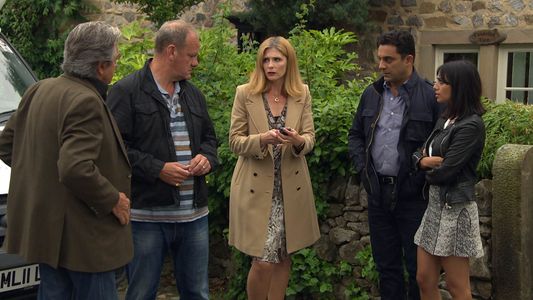