Chrissie tells a panicked Bernice that Lawrence confessed to protect her and is irritated when Bernice asks if she shot Robert. She's thrown to hear that her father was going to get married to Bernice. She asks Bernice to visit Lawrence with her later to make him see that he stands to lose more than his freedom, but it backfires when the visit ends with Bernice handing back her engagement ring. Lawrence wonders how Chrissie can be so sure he didn't shoot Robert given he had such a strong motive...

David tells Diane he doubts Pollard will turn up to cut the ribbon to officially open the shop. Meanwhile, Pollard's incredulous when Diane tells him Lawrence has confessed to Robert's shooting. She's disgusted at his attitude towards David contributing a percentage of his profits to Val's charity. At David's shop, Pollard tries to get in but it's locked. He makes his feelings about the tribute to Val clear to Edna and Pearl and gets a sledge hammer, beginning to trash the shop. Will this be the final straw for David?

Cain leaves the pub when he sees Kyle but Zak tells Moira she has to keep trying with both of them. Later, Kerry accidentally tells Kyle something. Rhona continues to worry for Vanessa when she has difficult feeding Johnny and calls herself a rubbish mum. Paddy is not acting his usual self. Victoria's angry when Aaron says Robert deserved what happened to him. Megan’s angry when Leyla doesn’t want to sign the paperwork to wind down the company, having picked up a few new customers. 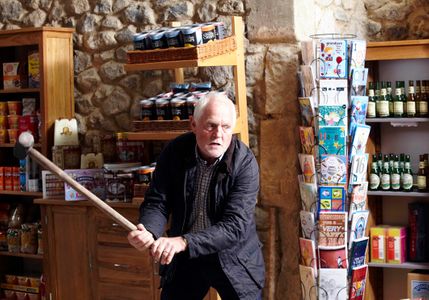