Katie looks through old photos of Adam as a child and James is struck by a particular snap of himself with Moira and John. Bringing back memories, he reminds Moira of their old feelings. James obviously doesn’t think Adam is just his nephew…

Charity goes on a sneaky appointment at the clinic so Declan bonds with Noah. Charity opens up to the consultant about why she can’t have a baby and books to have an abortion straight after the wedding. She arrives home to find Declan has told Noah about the pregnancy. Will Charity be able to go through with it?

Jai’s obsession with Charity starts to cause problems with Megan, however, it soon becomes clear that Megan would fight for Jai. How will she capture his attention?
​
Elsewhere, Finn finds Declan’s credit card and decides to get revenge on his mediocre reference. Chas lets slip to Cain that she is planning his wedding to Moira, but how will he react? Val gets ready for her date with Clive. It goes well until Val admits she is HIV positive. 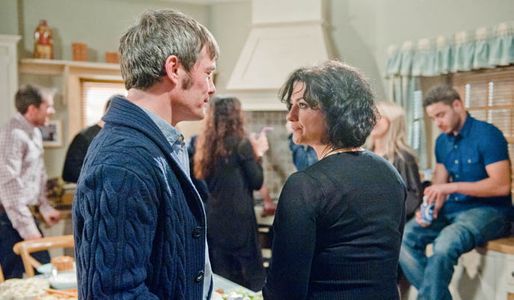