Paddy is on tenterhooks about the lunch at Home Farm and is doing everything he can to avoid having to go. Aaron’s angry to hear Paddy’s dropped him in it with Lawrence and the awards. But later when Aaron furiously confronts Paddy he is soon sickened with what Paddy tells him. As Paddy is forced to tell him that Robert tried to kill him. With the fear still visible in Paddy’s eyes it gives Aaron the confirmation he needs, that Paddy is telling the truth. Paddy’s firm when he tells Aaron to stay away from Robert, but filled with revenge Aaron can’t make any promises. That evening, Aaron tries to remain calm and keep his contempt from his voice when Robert arrives, suggesting they go away to the hotel together. And tomorrow can’t come sooner for vengeful Aaron.

Marlon tentatively broaches planning their separation with Laurel, although both daunted, they’re united in this. Soon Laurel accompanies Ashley to the see the Bishop. They are both driven by Tracy who later reveals she doesn’t have a driving license. Ashley and Laurel share a giggle. Meanwhile, Marlon worries how to tell the kids.

Jai and Megan head to a custody meeting. Double dealing Megan hides her vengeful feelings from him as she plots against him. Later both she and Rachel are flummoxed when Jai arrives with keys. Debbie’s thrown when Moira reveals Ross is working at the farm. Later, Cain’s unsettled to open another visiting order from Charity, Moira takes it off him and puts it in the bin. Seeing this as an opportunity to meddle, Ross starts to stir. 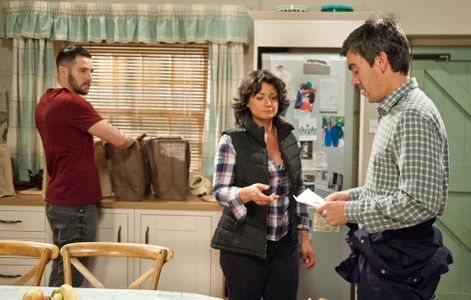