Robert continues to deny he’s gay to Victoria and Andy and he’s desperate to get away as Victoria continues to question him about his relationship with Aaron. Later Victoria’s shocked to hear Robert is planning to leave and she tells Andy she wants to call Aaron, thinking he might help. Andy recognises Aaron’s mobile number and all of a sudden the penny drops.

Ross is troubled when Pete threatens to tell the police about his gun. He decides to take Moses for a ‘walk’ along the river. Will he manage to discard the gun without being seen?

Jimmy’s taken aback when Marcus arrives and asks about his aunts’ jewellery, knowing someone called Rodney Blackstock sold it. Jimmy panics and ends up dropping himself and Rodney in it. He’s shocked when Marcus threatens him, wanting the jewellery back by the end of the week.

Priya tells David they’ve been refused planning permission because of a complaint and David reckons it was his dad. Robert tells Chrissie he’s keeping his side of the business, but he’s leaving the village. 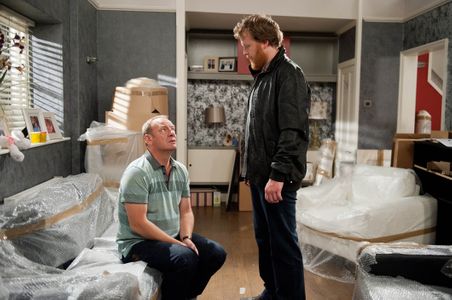