Adam is shocked by Cain’s admission but as a pensive Cain hides himself from the hospital CCTV with a large teddy, Adam tells Zak of Cain’s plan. He distracts a nurse and snatches a cordless phone from her desk and Chrissie is lured into Cain’s trap when she receives a call from the hospital telling her she needs to come in. As Cain prepares to cut Robert’s oxygen tube, an arriving Zak suddenly interrupts him. Can Zak persuade Cain to spare Robert’s life or will Cain’s determination to save his family finally mean it’s the end for Robert?

​Harriet suggests Ashley should ask Sandy to move in with them, but he is nervous about trying to convince his father this would be the best place for him. Sandy’s pride takes over and Edna scolds for being obstinate. Sandy tells Ashley he only has his pride left and soon puts Ashley in a upsetting predicament when he makes a big request.

Rhona suggests some time alone with Paddy, but he says he has to check up on Chas. He heads to the Woolpack where he stays drinking for most of the day but when Rhona comes to collect him, he apologises for what he’s done to her and Chas. They assume it’s just the drink talking, but behind the drunkenness there is a deeper guilt...

Moira’s afraid Cain will do something to get Aaron out of prison and Bernice finds out life with the Whites isn’t the picnic she was expecting it to be. 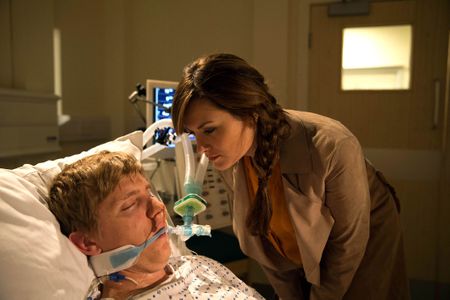