Chas tells Cain all about Aaron helping Robert cover up Katie's murder. She continues that she could kill Robert but Cain stresses what the consequences would be. Later, Chas goes to see Chrissie and tells her Robert has been released. When Chas mentions the gun in the safe, a determined Chrissie says she needs to make things right for everyone he hurt. At the garage, Cain tells an alarmed Aaron that Chas wanted him to kill Robert.

At the scrapyard, Robert tells Aaron that he told the police Andy had got it all wrong and has kept Aaron's name out of it but Robert's left stung when he calls him a pathetic, money-grabbing coward. Robert viciously goads Aaron and he's left seething.

Returning from their holiday, Lawrence and Bernice learn about the arrest in the pub and Chas and Ross listen in as Lawrence is told about Lachlan and the gun by Rakesh. Back home, Lawrence is left furious when Chrissie tells him Robert was behind the break in, whilst Lachlan secretly listens in.

Andy's stunned to hear from Diane and Victoria that Robert has been let go and his anger begins to rise. Robert pauses outside the door and realises he can use this to his advantage. Will Robert manipulate the situation to paint Andy in a bad light?

Marlon persuades Paddy to accompany him to a singles night. Priya's annoyed when Rakesh says he's still representing Chrissie. Cain warns Debbie she's on her own if she gets back with Ross. 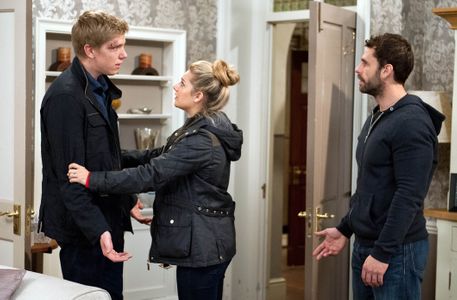