Debbie struggles to understand what Pete has just told her. He is floored to learn the body in the morgue is not Ross but a complete stranger. He tells Debbie about the fight he had with Ross and the severe head injury he gave him and what happened. Debbie can’t believe what she is hearing. Pete is soon bitter over how Debbie reacts. Later on, when Debbie wants them to go and find Ross’s body, Pete loses his temper and asks her how she can still love his brother. She is horrified and begins to panic, yelling at Pete to stay away, thinking he is just like Cameron. She runs out and leaves Pete utterly broken. James finds a panicked Debbie running down the street and is soon left in shock when Pete tells him he killed Ross. When he learns his son is serious, a devastated James asks Pete to take him to where he left the body.Out in the moors, Pete shows James over to where he left the body….

It’s Ruby’s funeral but Ashley is nervous about conducting it, hoping he doesn’t mess it up. It is heart wrenching when Ali, Amelia and Dan all speak from their hearts about Ruby. Meanwhile, Lisa and Zak struggle with Sam having banned them from it. Lisa is shocked when Zak tells her he thinks Rachel is knocking Sam about. Outside the church, Ali is concerned by Rachel’s furious reaction when Sam’s phone goes off as he’s pall bearing. Later in the Woolpack, Rachel tells Sam he ruined Ruby’s funeral. Sam follows her outside, fearing her temper. Once outside, Ali is witness to Rachel’s behaviour and makes a life changing suggestion to her sister.

Diane gathers a small group in the Woolpack back-room to watch Val’s DVD, which turns out to be a lively video detailing how she wants a spectacular and extravagant send off. All except a numb Pollard are amused and touched to see Val again. But soon the DVD content takes a turn when Val dishes out some of her rather harsh opinions.

In prison, Bob and Brenda are worried whether Harriet will be able to track down Carly. Bob is left uneasy when a fellow inmate Ged (James Gaddas) tries to coerce him into getting Brenda to sneak stuff into prison for him. Bob comes clean to Brenda, he needs her to smuggle stuff in for Ged. But will Brenda? 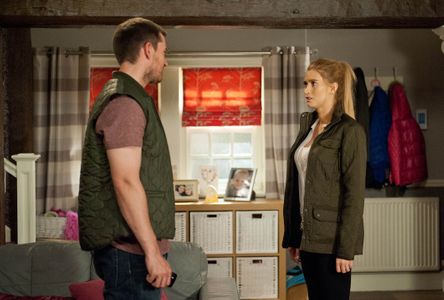