Lawrence follows Robert inside Keepers. Lawrence says he had an interesting chat with Chrissie and Robert steels himself for a fight. Unruffled, Robert explains about the break in and gloats that he set up the rent boy. Lawrence is infuriated.

Andy flies at Robert, sickened by his manipulation. Aaron breaks it up but Andy reels when Chas guiltily covers for Aaron and Robert and lies that Katie was going to leave him. Andy runs out when Diane and Victoria start to be hoodwinked by Robert’s lies. Chas privately tells Robert to drop dead when he thanks her. Later that day Chas tells Robert to leave the village warning that she’s serious, saying “you value your life, you leave tonight”. Robert doesn’t heed Chas' warning and as he takes a step back there’s a sound of a gunshot. Blood appears on Robert’s chest. He’s eyes meet Chas’ in utter shock as he collapses...

Diane receives a call from Andy who apologises, saying if she'd heard what Robert did to Katie she'd do the same thing. He hangs up, leaving Diane and Victoria extremely worried.

Debbie tells a disappointed Ross that she can't give him what he wants and Pete watches triumphantly as his brother feels the pain of rejection. Outside the pub, Ross is fuming that Pete saw Debbie rejecting him and Pete tries to cover a twinge of worry as a murderous Ross explains Debbie was the only thing stopping him from using the gun. Pete regrets rubbing Ross' nose in it when he gets a text to meet him at the farm. Moira's floored when he says Ross will be waiting with a gun and tells Pete they'll meet him together.

Harriet's worried when Ashley doesn't show for her party. At the singles night Marlon gets on well with Chloe but Paddy, worried about Aaron, makes his excuses and leaves.

Robert slumps forward onto Chas after being shot. She manages to move him off her and stands up shakily, horrified as he bleeds. Lawrence arrives and Dan jumps into action trying to save Robert. Bob leads a shocked Chas into the pub as the paramedics lift Robert into the ambulance. Lawrence calls Chrissie and leaves her an urgent message. Out walking on a road, Lachlan throws something into the hedge when he sees Lawrence's car and is visibly shaken when he's told that Robert's been shot. At the hospital, it's clear Robert's life hangs by a thread as a team of medics stand over him as Victoria tells Diane they should have stopped Andy. Robert flat lines and is rushed into surgery.

Ross visits Debbie to say goodbye. He tells her he might be gone for good and Debbie tries to bury a pang of regret.

Marlon's on a promise with Chloe but is interrupted by a phone call from a frightened April. Chloe types her number into his phone and kisses him before he reluctantly tears himself away. Back in the village, Marlon's surprised to see Paddy's only just arriving home.

Harriet asks Bob why he threw her a party and is reassured when he covers saying he only did it to give her and Ashley some time together. 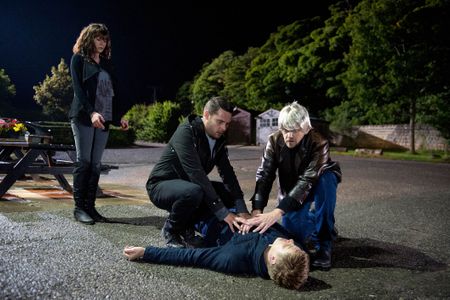 Emmerdale 3/09 - Lawrence in trouble with the law