James fills in in Emma about what happened with Pete and Ross. Whilst Pete tries to talk to Debbie. He is guilt ridden when she compares him to Cameron, warning him to stay away from her. Pointing out how even if she could forgive him, he surely could never forgive her for her affair with Ross. Pete is devastated but unable to deny it. Later on, Emma and Finn are finding it hard to locate Ross without the help of the police. Pete arrives and feels the scorn of his family for the first time in his life.

Violent prison inmate Ged has arranged for his friend Anita to meet Brenda with a sim card for her to sneak into prison. As Brenda arrives through prison security she sets off the metal detector. Terrified with what she is doing and aware Bob’s safety whilst inside, is in her hands.

Things are awkward between Sam and Rachel and despite knowing it’s for the best, Sam is devastated to be losing her. Jai is shocked to hear Rachel is moving to Liverpool, but powerless to stop her. Rachel goes to see Megan thanking her for her help, and left shocked when Megan reveals she is still pregnant. Rachel then says her goodbyes.

Ali tells Amelia she is going to live with Sean. Dan is told he needs to be there for his daughter, but it is clear that he is still struggling. David tells Alicia the move to Portugal is on hold for now. Alicia convinces him to book flights, but his reluctance is palpable. 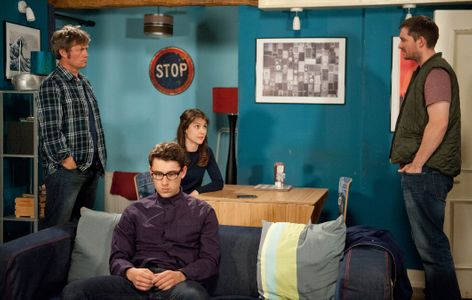