Emma is surprised to see Ross, but he is in no mood for her and she is disappointed by his lack of support as she rants about James and Chas. Pete is packing up, and is shocked when he opens his caravan door and sees Ross, who hits him with a baseball bat. What does Ross have planned for a now unconscious Pete?

Robert’s interest is piqued when he hears Bernice has moved into Home Farm, knowing it could be useful to him. Bernice is thrown to learn she will have a separate room from Lawrence and tries to cover her disappointment. She covers when she gets a message from Robert asking her to visit him and he warns her the Whites are a dangerous family. He wants her to keep an eye on them...

Ashley helps Sandy move out of Woodbine and Edna covers how upset she is. Sandy gives Edna a useful leaving gift (for info not copy: a walkie-talkie as a means of staying in touch). Zak and Lisa hope Belle is over Kirin as they sit her down to explain he was arrested for possession while she was away. Marlon says the school have been in touch and they have got a new teaching assistant for Leo. 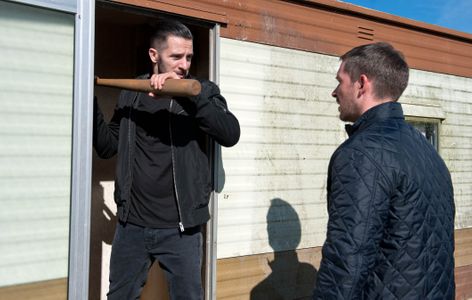