Diane is unconsciousness as Chas tries to stem Diane's bleeding. The stakeout is interrupted when Aaron gets a call from Chas. He and Cain are concerned as they run to the pub and rocked to realise Chas stabbed Diane. Chas makes a run for the door as Cain and Aaron apply pressure to Diane's wound. Cain chases after Chas and sees she's struggling with a panic attack. The paramedics soon tend to Diane. Cain tries to reason with Chas, desperate to help. Zak and Lisa are worried when the police arrive looking for Chas and Aaron. Aaron arrives and does his best to pretend Chas is in danger whilst the police are there but as soon as they leave, he tells the others they can't find her and she was the one who stabbed Diane. Meanwhile, Diane has been rushed in for surgery at the hospital.

Sandy can't sleep and decides to keep Ashley company, though it's clear Ashley isn't in the mood for fun. Laurel's finds Ashley in the café and senses a shift of perspective in Ashley about his father.

Carly's surprised to see April still up and is persuaded to let her stay up longer. April tells Carly she has toothache so Carly takes her to find some medicine. Later David get’s a shock to hear the shop alarm going off and is surprised to see whom the intruders are.

Nicola and Jimmy make up again, the way they know best. Andy's taken aback when Robert suggests killing whoever it was who stabbed Diane, both united at the prospect of vengeance. Emma and James are uneasy to think there was a stalker after all and are concerned for Chas when they learn about the stabbing, unaware it was Chas who did it. 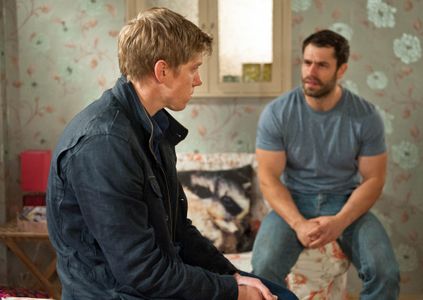