Charity tries to douse out the fire without any help from Declan, but it continues to spread. Declan watches with grim satisfaction. Outside, Megan looks desperately for Declan in the woods. When she sees the house on fire she calls the fire brigade. Charity tries to get Declan out of the house, who panics as the flames begin to surround him – he leaps out of a window and they drive off in Charity’s car. Megan then arrives at the house and runs in, looking for Declan. However, she gets trapped and loses consciousness as the sirens approach the house…

Sam and Rachel announce their engagement and everyone is delighted, though it’s short lived when Sam hears about the fire and thinks it must be from when he knocked over the Christmas tree. 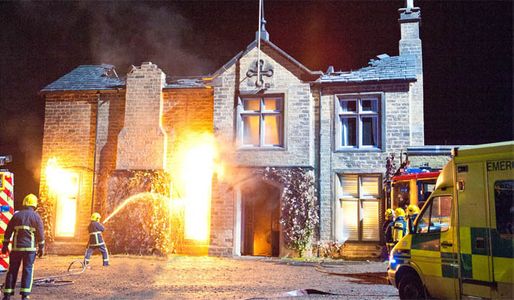 Emmerdale 30/12 – Who will be held responsible for the fire at Home Farm?