Cain's angry to learn Pete is hanging around but Moira thinks he wouldn't attack Debbie as he worships the ground she walks on. Cain, however, points out Cameron did as well! Later, Debbie's unnerved to see Pete in her house. He tells her he is just picking up his stuff, but he's heartbroken to see she's terrified of him.

At the prison, Bob tells a terrified Brenda that she won't have to sneak any more stuff into prison and hopes his bravado has reassured he. Later, in the cell, Bob stands up to Ged but is wary when he agrees not to go near Brenda again. He worries he has made things worse. Later, Harriet's shocked when Bob rings her and says she has to change her statement about Ged because if she doesn't, Ged will hurt Brenda. Harriet tells Bob to lie to Ged that she'll do what he wants, hopeful Bob will be released before Ged goes to trial.

Zak tells Megan that Rachel is as much to blame as Jai for Sam's current state and explains why. At Home Farm, Sam can't believe Zak has told Megan and he is furious until he is completely thrown when she rushes out, to be sick. Sam insists he take her to see a doctor and she reluctantly agrees. Later, Sam realises Megan is still pregnant and invites her to live with him. She is grateful for his support. However, Jai evicts Sam from his house when he learns about Megan moving in. At the factory, Rishi and Priya try to mollify clients who have heard the gossip about Jai. Megan tells them about Jai evicting her and Sam and asks Rishi for help. Rishi warns Jai that unless they recover the orders he lost they won't be able to pay the staff and says he'll only help Jai with the business if he lets Megan stay rent free with Sam.

Doug watches Val's DVD as he helps with funeral arrangements but is left unimpressed when Val has given Diane some advice. Later, in the pub, Doug shows Laurel the comedy tie he's bought for the funeral, anxious to prove Val was wrong about him.

Jai looks for Rachel but Lisa and Zak refuse to help him. Emma's overwhelmed when James suggests they tell people they're back together

Alicia tells Jacob they can't go to Portugal at the moment as David has to look after Pollard. 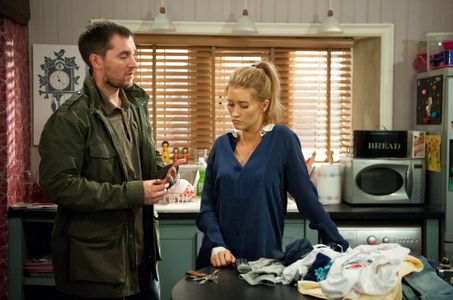 Emmerdale 12/05 – Pete is unnerved by Debbie