Emmerdale 28/09 - Who shot Robert? Suspicions run high with everyone looking to be guilty

Diane and Victoria worry because Andy is missing and wonder if he could have pulled the trigger. Aaron warns Chas to stay away from Chrissie and is frustrated when she doesn’t mention Chrissie’s gun to the police. Diane is relieved to hear Andy has at last been in touch. Chas finds it hard to re-live the night of the shooting as she's questioned by the police. She is terrified Aaron was the one who pulled the trigger. At Home Farm, Chrissie is concerned that the gun and bracelet are both missing from the safe. Lawrence warns Chrissie and Lachlan not to say anything to the police about the gun. Chrissie doesn't mention to him that Chas already knows about it. And soon Chrissie is anxious to find out what Chas has been saying to the police.

Paddy is looking out of sorts. Later, Marlon's puzzled when Paddy lies to Rhona about being out with him all night. Later, Marlon asks him why he didn't tell Rhona the truth about his whereabouts on the night of the shooting. Will Rhona confront Paddy over his whereabouts?

At the factory, a coked up Jai is in a foul mood. Kirin is trying to cheer Belle up and suggests getting away from work and later the pair discuss taking their relationship further. 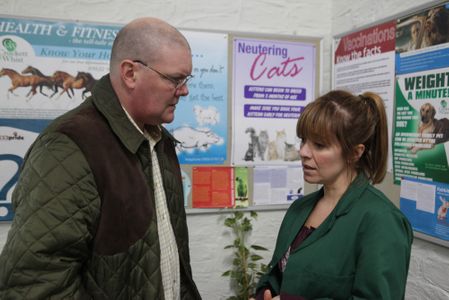