Ross looks like he is about to leave the village when he see’s April, she is angry about having to live with Arthur and much to her amazement, Ross seems to know exactly what it’s like to hate a sibling. James has gone to the pub looking for Ross, but ends up confiding in Chas how he has failed his sons. Meanwhile, Debbie has returned from holidays and has called to see Ross. She wants him to kiss her, but he warns her he will only end up hurting her. Is he right?

Rishi lies to Jai regarding his meeting with the solicitor telling him it concerned the supermarket contract. Priya feels under pressure when the family worry about her working too hard. Could her eating disorder return? Priya screams at Rakesh, telling him to get out of the office. She’s determined to prove she can take over the business. After speaking to Laurel, Rishi makes a phone call and warns the person on the other end his proposal isn’t going to make either of them popular...

Kerry and Dan become cautious of what they eat when Amelia starts monitoring their diet for a school project. Amelia tests Kerry’s blood pressure and tells her she is in the danger zone for a diabetic. Bernice confesses she told Robert about the restraining order and Chrissie questions where her loyalties lie but Chrissie later feels guilty and suggests Bernice has her wedding at Home Farm. 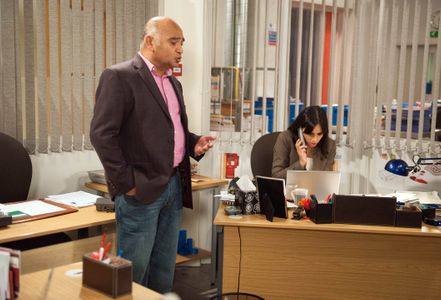