James snaps at Ross, wanting answers about Finn's attack. Donna tells Ross she has a plan to deal with Gary and plants drugs at his house but she soon realises she's fallen into a trap when during the police raid the drugs are nowhere to be seen. Donna's blood freezes when she spots Gary talking to April. He has a warning for her but what will it be and how will it affect her relationship with Ross?

Jai’s annoyed to realise he has lost his only ally when David admits he’s happy now Priya is staying in the village. Megan’s angry when Charity tells her and Leyla it will cost them £10,000 to use her old home, Home Farm as a wedding venue. Megan argues with Jai when he tells her she might have to bite the bullet. Annoyed after his argument with Megan, Jai flirts with Leyla but when they are interrupted by Megan, Leyla feels a pang of jealousy...

Katie tells Andy he has to tell Bernice about their relationship but Bernice is meanwhile still hopeful about winning Andy back and pays Adam to stay out of the house that evening. Dressed in a very sexy outfit, Bernice awaits the return of Andy. Her magic moment backfires when Andy arrives home with Katie and humiliated Bernice reacts badly tipping a pan of spaghetti carbonara over her head. Still dressed to impress, Bernice tells everyone about Andy and Katie and swishes out, believing she’s now destined for the scrap heap, and Nicola goes after her, followed by an impressed gentleman called Julian who has a proposition for her?
​
Adam doesn’t get a job he has applied for and it’s another bitter blow when he hears about Katie and Andy. Ali’s encouraged when Debbie agrees to take Sean on as an apprentice and Vanessa agrees to move in with Katie and Leyla. 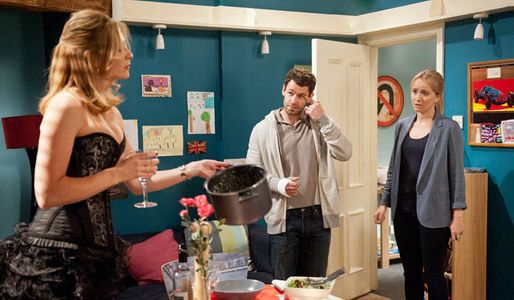