Emmerdale 3/09 - Lawrence in trouble with the law

Lawrence talks to his solicitor about the assault but reiterates the problem of his son-in-law still exists and needs sorting - quickly. Soon after, Robert suggests to Lawrence he could do some digging on Connor, but will Lawrence allow Robert to help him, and is Robert’s help genuine? When Lawrence is later asked to attend the police station to go over the evidence, it’s clear things are not looking good. Could Robert’s intervention bring about a change of circumstances for Lawrence?

Jimmy asks Rodney about being a gigolo but is left humiliated when Brenda laughs at him. Later, Rodney's running late for his date with Suzie and asks Jimmy to entertain her. Jimmy begins to enjoy himself and after a couple of drinks he takes Suzie back home for a coffee, keen to prove Rodney wrong about him. But later, things take an unexpected turn and both Jimmy and Rodney get more than they bargained for.

A stressed Harriet lies to Brenda she's close to finding Carly. She tells Ashley she can't tell the authorities about Ged, as Brenda would get in trouble for smuggling the sim card into prison. Later, Harriet's relieved when David and Diane agree to give Bob a character reference, behind Pollard’s back. Harriet agrees to look after April as Ashley forgot he'd said he could, but could April prove key to tracking Carly down?

Bernice is uneasy around Lawrence following the allegations against him and is further unsettled by Edna’s words of warning, but will Lawrence win her over with his generous offer? Aaron is rattled by Robert’s digs regarding his friendship with Andy and Chas worries when Aaron packs a bag to go to London for a while, sure there is more to it than he's letting on. 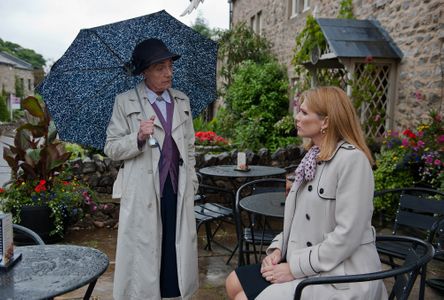