Ross panics when Debbie tells him she hasn’t told Pete the truth yet, knowing it’s only a matter of time before Cain works him out. Arriving home Debbie fights back her tears as she begins to write a breakup letter to Pete. Elsewhere, when Finn makes a joke about Pete and Debbie not getting married, Victoria senses some truth behind his words and calls him up on it. Finn’s left further on edge when a smitten Pete arrives with an expensive necklace he’s bought Debbie. Later, Debbie and Ross are both stood with their packed bags ready to leave, when suddenly Cain arrives with a bombshell for Debbie but will it be enough to put her off Ross for good?

Cain tells Moira he thinks he has an idea who the culprit behind the picture could be. However, when Cain confronts a fearful Robert he tells him it wasn’t him but could be Ross. Cain tells Moira it wasn’t Robert but she’s wary to hear Ross is a suspect and reveals she and Ross had fallen out because of his affair with Debbie. Soon Cain and Moira are piecing the evidence together.

Sandy’s takes a tumble whilst out walking Tootsie.

Knowing about the affair Lachlan furiously approaches Robert and suggests he leaves their family alone. Val hands Pollard a eulogy she’s written herself for her own funeral.

Debbie’s fuming following Ross’s revelation. Debbie furiously interrogates Ross. He’s desperately trying to save things but it’s clear she’s finished with him. Cain’s left worried when tearful Debbie arrives and confirms it’s over with Ross but suddenly runs out knowing Pete might still have time to find the breakup letter. Meanwhile, Ross tells Finn the truth. On arriving home Debbie panics to see the letter has gone and Pete is already at home...

Lawrence is worried how angry and bitter Lachlan feels towards Robert. Meanwhile, Robert’s forced to drink alone as Chrissie joins Andy. As she unloads to him she gets the wrong impression and leans in for a kiss but will it be reciprocated?

Ruby’s concerned when Finn turns up with Tootsie, suspecting something’s wrong she and Dan rush out the door in pursuit of Sandy.

​Pollard reluctantly reads Val’s eulogy out-loud to her but it all becomes too much. Harriet reveals to Sandy someone she put away in prison has recently escaped. 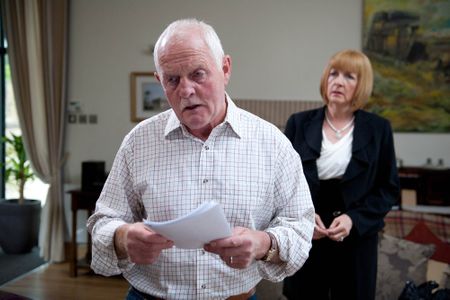