Lawrence is irritated to find an arrogant Robert sat at his desk and gives him a cheque as a bribe to stay away. Lachlan is angered when he overhears Robert wind up Lawrence. Meanwhile, Chrissie and Chas argue but soon bond over their mutual hatred for Robert. Lachlan watches Lawrence take his heart medication, which gives him an idea.

Finn’s troubled to find Ross leaving with his bags packed. Debbie is terrified Ross is going to reveal their affair and frantically texts Ross asking to meet. Moira’s taken aback by an optimistic Ross when he reveals Debbie wants to meet him. But will Ross be let down?

Val gives Pollard a hard time over the funeral arrangements and plans a dinner for all her nearest and dearest. Later, she’s hurt by the response.

Dan informs Kerry she’s not invited to Debbie and Pete’s wedding before he dashes out to avoid dealing with her reaction. Ruby reveals her interest in starting a nursing career. Belle and Zak approach Moira, demanding she should speak to Cain about inviting Joanie to the wedding. 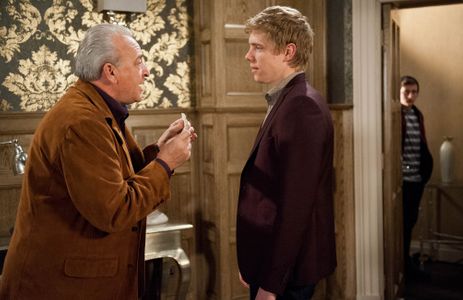