Val is left shaken after her less than romantic night with Tiny. Pollard arrives at the barn to find her with a bruised cheek but believes her cover story. Later, at the B&B when Tiny arrives with the bread order he makes reference to Val being ‘diseased goods’, unaware she is listening.

Pollard is furious to realise it was Tiny who caused the bruise on Val’s cheek and challenges him to a fight in front of everyone, including Diane and Val. As tempers soar it is not long before the police arrive to sort out the fracas.

Alicia and David are shocked to discover from the solicitor Alicia has been left seventy thousand pounds inheritance money. But Alicia is confused; she never knew a Keith Cheesedale who supposedly left her the money in his will.

Could a wedding competition be the answer to Kerry’s prayers? Money is tight for Ali and Edna takes an interest on hearing they need a new car. 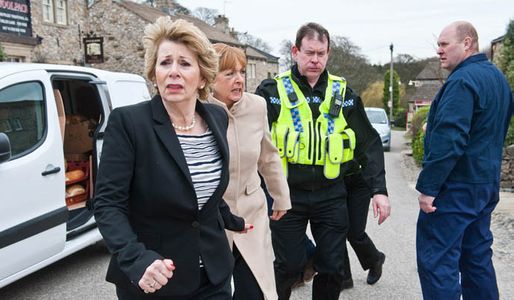