Adam and Victoria record their video for Johnny, whilst Vanessa tries to hide her dread at having to spend another day at the hospital. She arrives at the vets, eager to help, but Paddy and Rhona insist she take as long as she needs with Johnny. She leaves frustrated. Later, at the hospital Johnny’s incubator alarm sounds, medics rush in to tend to him as Victoria tries to comfort a terrified Adam. But where is Vanessa? And how will she react to the news about Johnny?

David clears the trashed shop as Priya urges him to stand his ground with Pollard, but he insists his dad died when Val did. Later in the cafe, Pollard gives David a cheque for the damage to the shop, David’s shocked by the amount, but Pollard insists it will be enough to ensure their paths don’t ever have to cross again, but is that really what he wants?

Joanie’s frustrated to learn Kyle knows Cain’s his dad, but Zak assures her they will bond in time. Later, Cain’s unimpressed to find Kyle with Moira and he’s soon forced to look after him when Moira gets a call from hospital about Johnny. Cain takes Kyle home to Wishing well, but how will he react when Kyle calls him ‘daddy’?

Rakesh and Priya are guilt ridden when Rhona desperately searching for Vanessa, revealing to Kirin that Johnny’s ill. 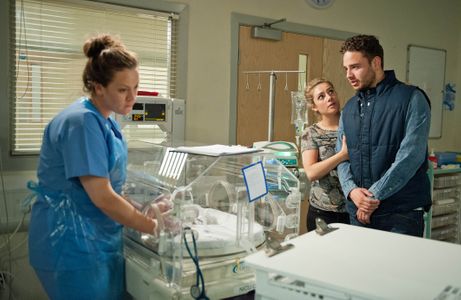