Victoria tries to reassure Adam, who’s struggling ahead of Johnny’s operation. Meanwhile, Vanessa attempts to compensate for her lack of feelings towards Johnny by frantically researching his operation. As Rhona and Carly try to reassure her, Vanessa is forced to hide her true feelings. She struggles again, later in the cafe when everyone offers their support, Rhona is taken aback by her edginess. Back at the hospital Vanessa is left feeling redundant as Victoria and Adam fuss over Johnny. As she goes in to see him, Moira grows concerned over Vanessa’s cool and detached behaviour. Victoria’s mortified when a nurse confuses her as Johnny’s mum, further heightening Vanessa’s sense of failure. It’s soon clear it’s all becoming too much for Vanessa and later she makes a devastating admission to Rhona… They all wait to find out if Johnny’s operation was a success…

Cain berates Moira for setting him up with Kyle yesterday, but she’s unmoved, reminding him of what they are going through with Johnny. Meanwhile, Zak reveals Kyle knows the truth about Cain. Cain’s annoyed to hear it was Kerry who told Kyle who his dad is, Zak loses patience and questions why he’s so scared to be a father to Kyle. Later, a concerned Debbie finds Cain at Shadrach’s grave. Will a heart to heart with his daughter change his feelings towards his son?

Leyla’s concerned for David and grows anxious grumpy Pollard might scupper her party later. She’s thwarted when Pollard refuses to have her party at the B&B. Tracy offers to sort everything, but it will come at a price. Soon Tracy fabricates a lie to Pollard leading him to rush off from the B&B. Tracy’s pleased how well her plan went. Later, Leyla’s on a high as she and Tracy congratulate themselves over the party. However, when they spot Pollard heading back, a worried Leyla warns Tracy to intercept him if she wants her money. Leyla desperately tries to end the party, but Pollard bursts in and begins to insult everyone. Will Tracy and Leyla find a creative way to talk themselves out of a sticky situation? .

Bernice insists to Chrissie she had to walk away from Lawrence after he confessed to shooting Robert. Chrissie asks her to reconsider the engagement but she declines, causing Chrissie to label Bernice a gold-digger. Hurt by Chrissie’s words, Bernice opens up to Kerry who is shocked to learn details of Bernice and Lawrence's’ relationship.

Bob’s thrown when April asks whether he and Brenda are splitting up. Bob promises they will be fine, and is later chuffed when Carly agrees to help him come up with a plan. Priya insists Rakesh tell Kirin the truth about baby Johnny before it’s too late. Ashley’s flustered when he momentarily forgets the rift between Andy and Robert and his actions leave Andy angry. 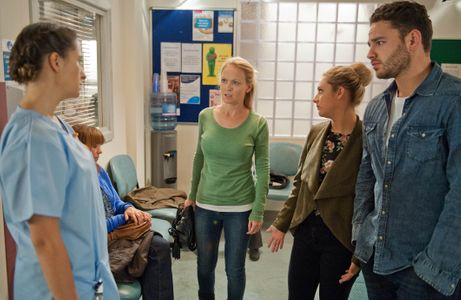