Brenda's stressed as she sets off for court and Harriet is firm as she tells Ashley what she might have to do. Petrified, Bob is led into court and Harriet knows he's relying on her. Bob's full of shame as the Prosecution Barrister details his crime for the judge. As they break for lunch, Brenda snaps at Harriet for trying to put a positive spin on the proceedings. Carly arrives but on seeing Brenda in tears, assumes the worst and heads off. Harriet sees her and urges her to make a statement, telling her she wouldn't have turned up if she didn't have a conscience and Carly's left in a quandary. Brenda and Harriet are soon surprised when Carly arrives and explains to the judge her involvement.

Belle asks Zak and Lisa if she can go away with Kirin and is stunned he already asked their permission. Belle lies to Joanie, that she and Kirin are an item as she gets ready to leave for Birmingham. She confides in Joanie that she can’t talk to Lisa about sex. Joanie tells Belle she just has to be confident. But could Joanie’s advice backfire when Belle leans in for a kiss?

Kerry draws some eyebrows on Dan but he's in a flap before his presentation, after accidentally spilling his coffee over his notes he seems defeated. But later explains he’s got an new idea - he’d like to be a paramedic. David sees the guide price for the shop and tells Alicia he's thinking of buying it back blurting out he doesn’t want to go back to Portugal. 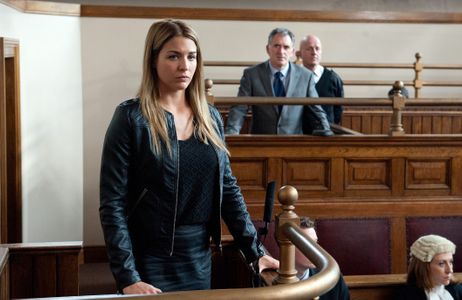